An Overview of Federal, State and Local Expenditures

While it is relatively easy to quantify and analyze the federal government’s spending in key policy areas on an annual basis using federal budget data, comprehensive data on state and local government finances is collected only once in every five years by the Census Bureau as part of the Census of Governments. The most recent data for state and local government finances (for 2017) was released in November 2019. Based on these data sources, the current note explores the intergovernmental aspects of public expenditures in the United States—generally considered the first “pillar” of intergovernmental finance—by considering how much governments spend at each level in the United States, and what governments at each level spend their resources on.

Federal, state and local governments have important roles to play in how we, as a country, provide for the common defense, establish justice, and promote the general welfare. Where individual actions and private markets fail to achieve collective ambitions, federal, state and local governments step in by constructing public infrastructure and providing public services.

The framework for what each government level spends on—and ultimately, how much they spend—is provided by the assignment of powers and functional responsibilities in the U.S. Constitutions and in the respective state constitutions.

The U.S. Constitution (Article I, Section 8) states that “The Congress shall have Power To … provide for the common Defence and general Welfare of the United States” and assigns a list of specific powers and functions to the federal government, including the power to regulate commerce, to raise and support armies, and to establish post offices and post roads.

In turn, the Tenth Amendment limits the powers and functions of the federal government by stating that “[t]he powers not delegated to the United States by the Constitution, nor prohibited by it to the states, are reserved to the States respectively, or to the people.”

How much does government (at the federal, state and local level) spend?

Two data caveats should be noted. First, the spending figures cited here include only regular (or “on-budget”) government expenditures. As such, expenditures from the social security trust fund and other extra-budgetary expenditures are excluded. 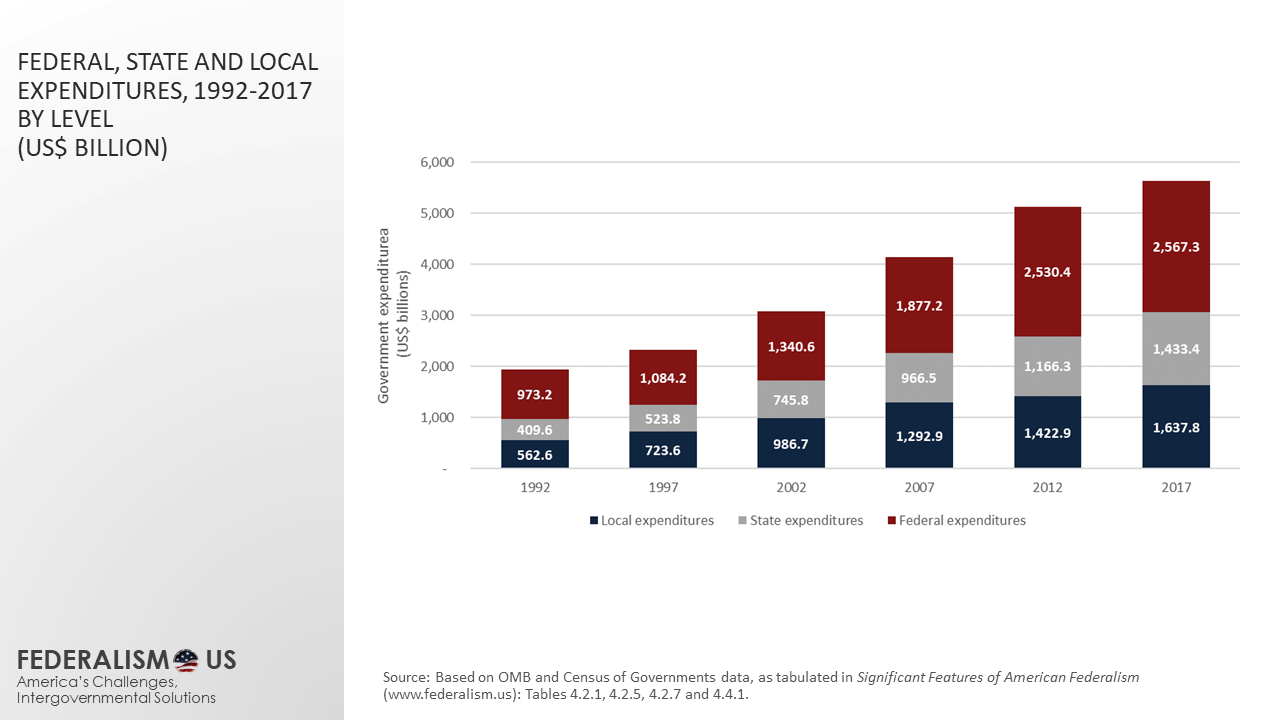 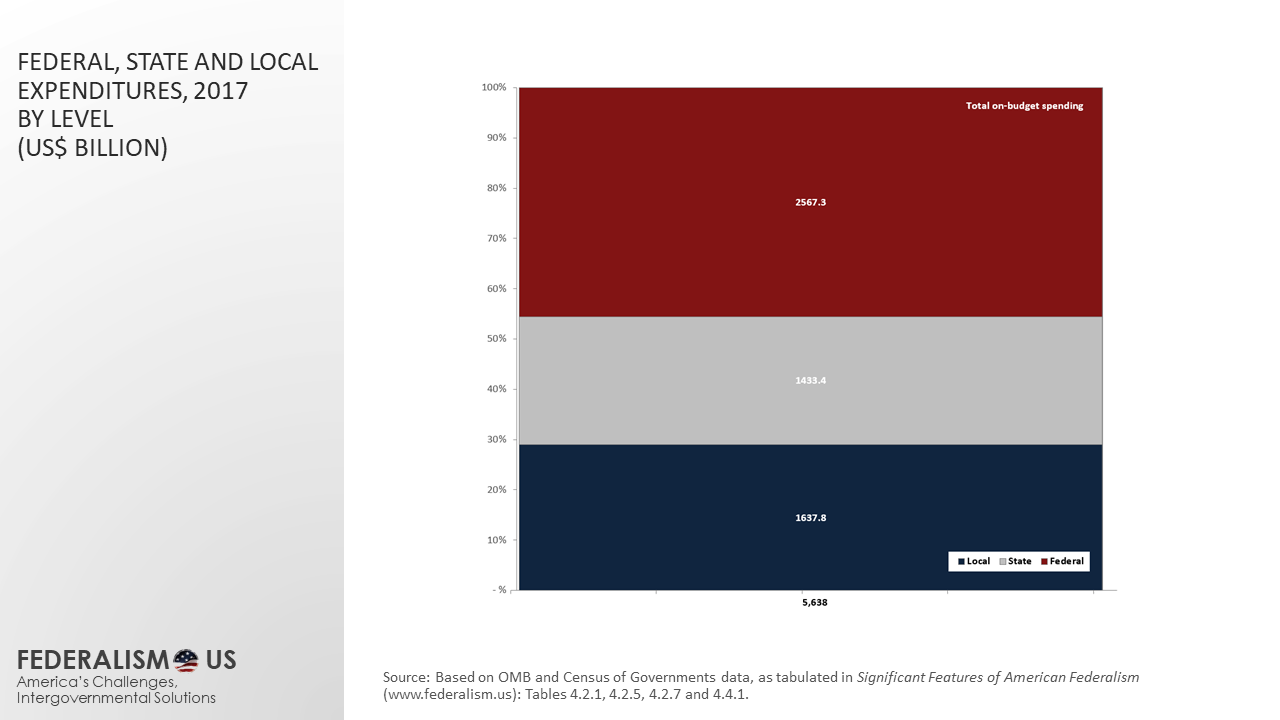 In this functional breakdown, the smallest expenditure category is environment and housing (248 billion). 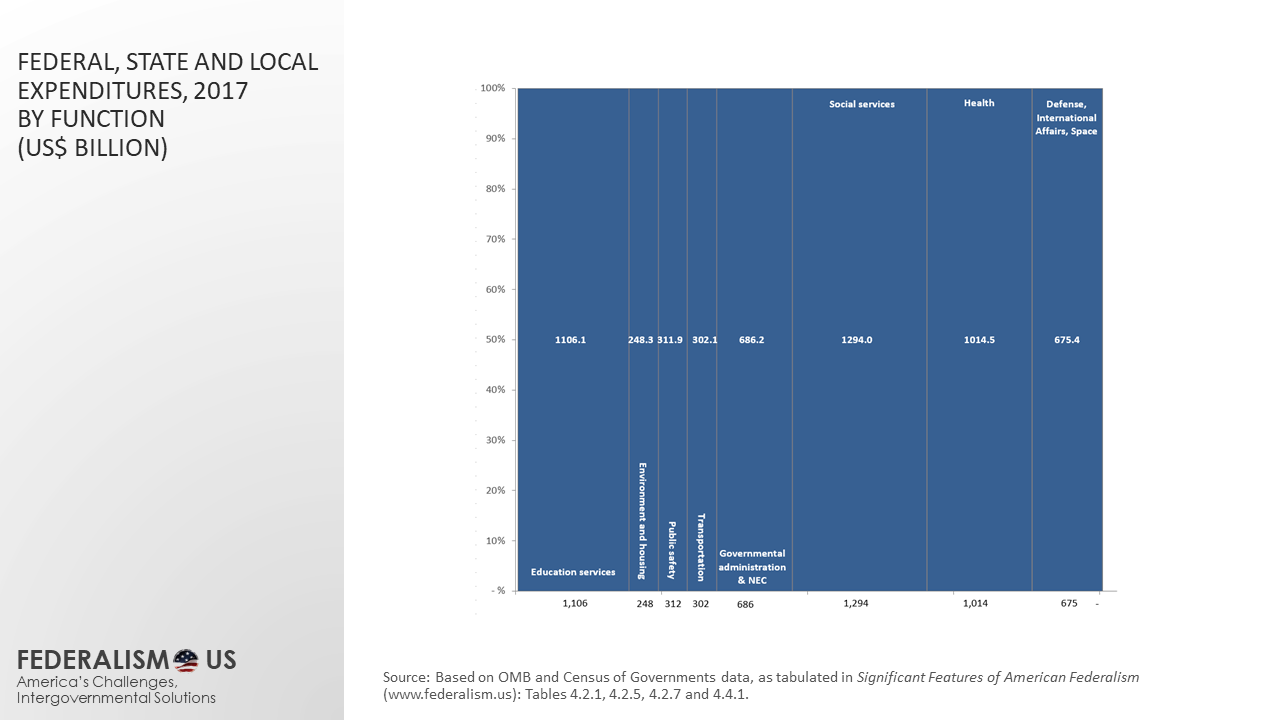 How much does each government level spend on each function?

Instead, the vast majority of direct education spending—2,182 dollars per person—was done by local governments. Similarly, the majority of spending on environment and housing programs as well as on public safety takes place at the local level.

Other functions reflect more balanced spending across government levels. For instance, federal, state and local governments all contribute significantly to transportation spending, which includes federal and state highways, along with local roads, public transit and other transportation infrastructure.

In turn, expenditures for social services and income maintenance programs largely take place at the federal and state levels, whereas the majority of health expenditures are made by the federal government. 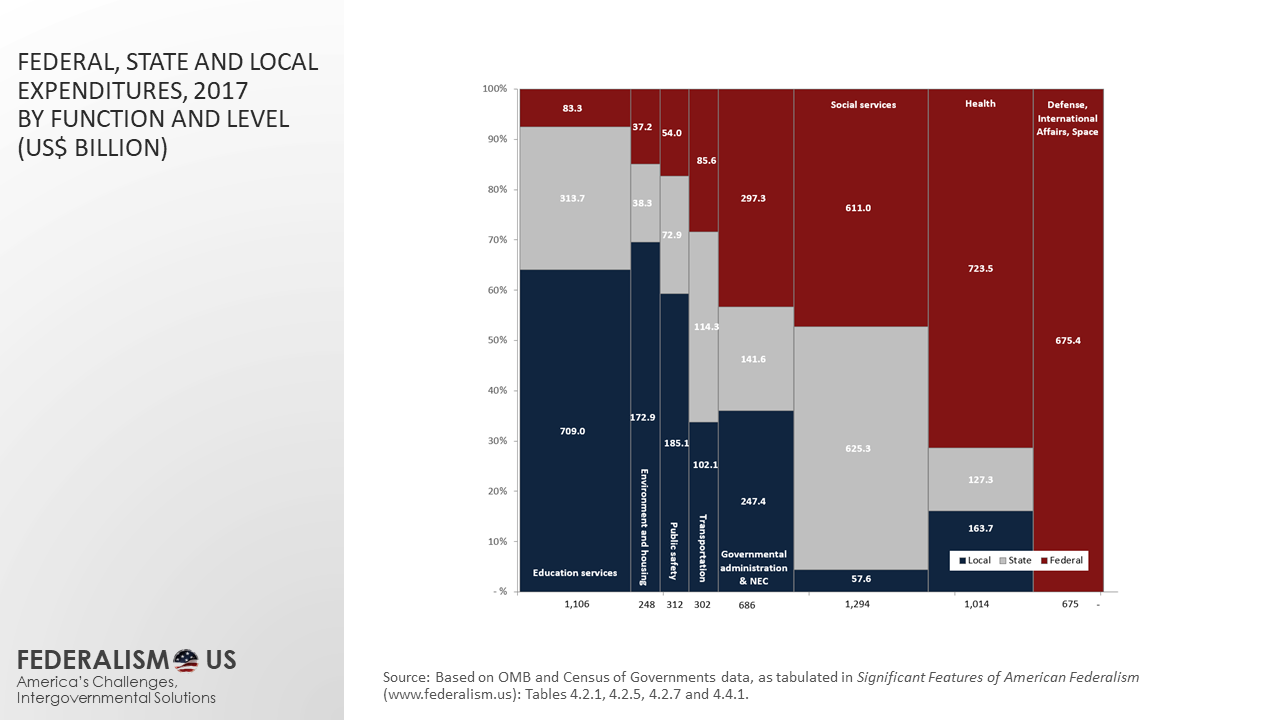 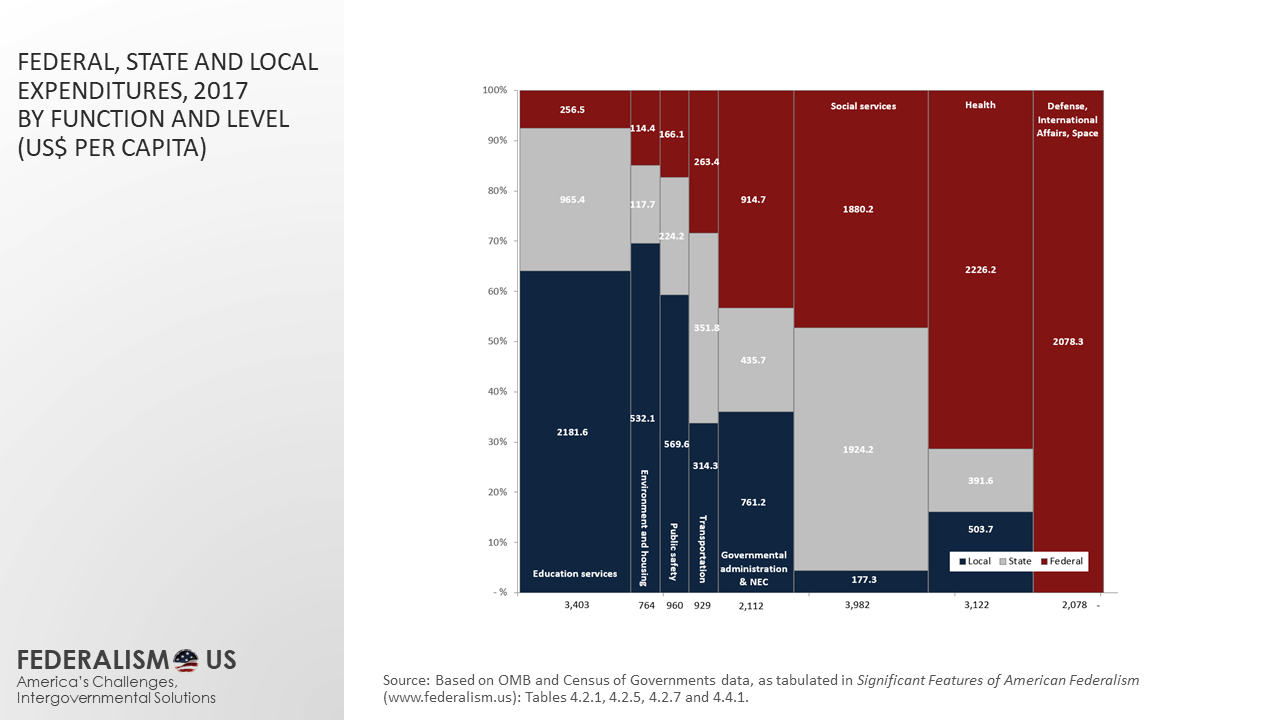 Distribution of state and local expenditures across states and localities

For instance, even though state and local governments on average spend 4,410 dollars and 5,040 dollars per resident, respectively, these spending amounts vary considerably from state to state.

State and local expenditures (combined) exceeded 17,500 dollars per capita in the District of Columbia, Alaska, New York and Wyoming, while Florida, Arizona, Georgia and Idaho spent less than half of that amount (i.e., less than 8,750 dollars per person) in 2017.

Generally, local governments that have a greater revenue base and/or a higher demand for public services (as proxied by household income levels) tend to engage in higher levels of public expenditure. In addition, it is likely that state and local government jurisdictions that face higher service delivery costs tend to engage in higher expenditures as well. 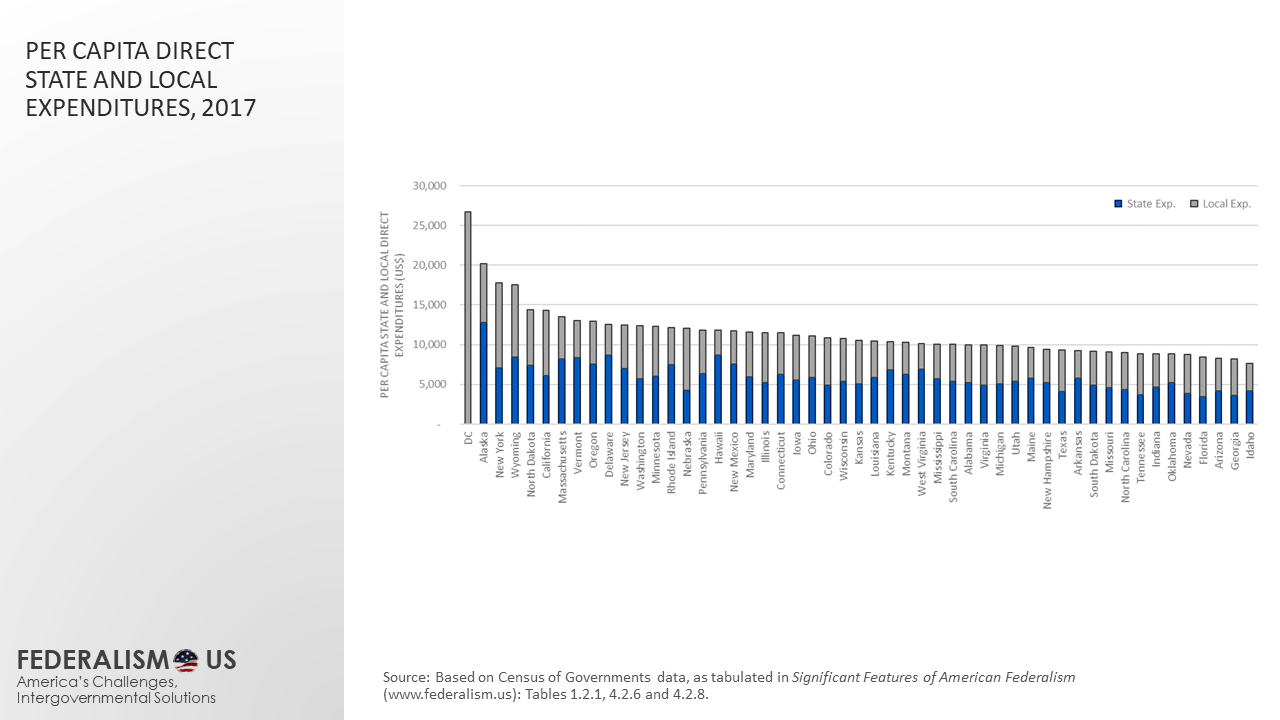 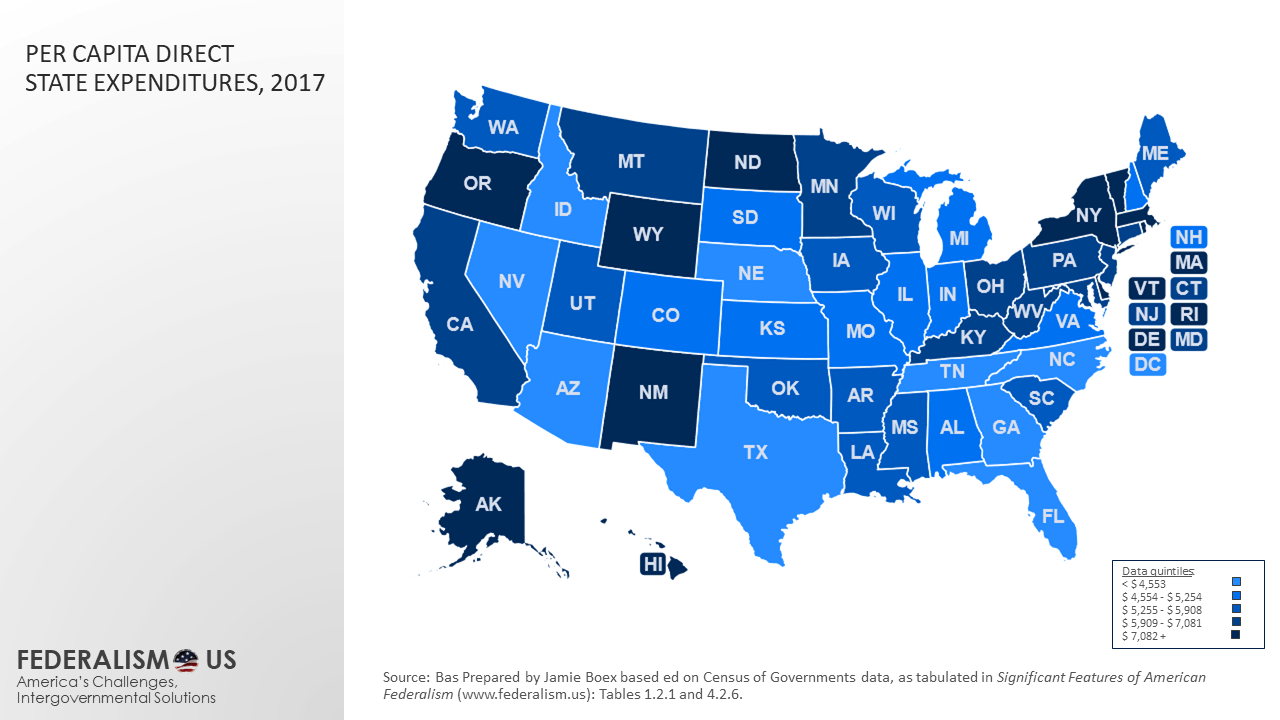 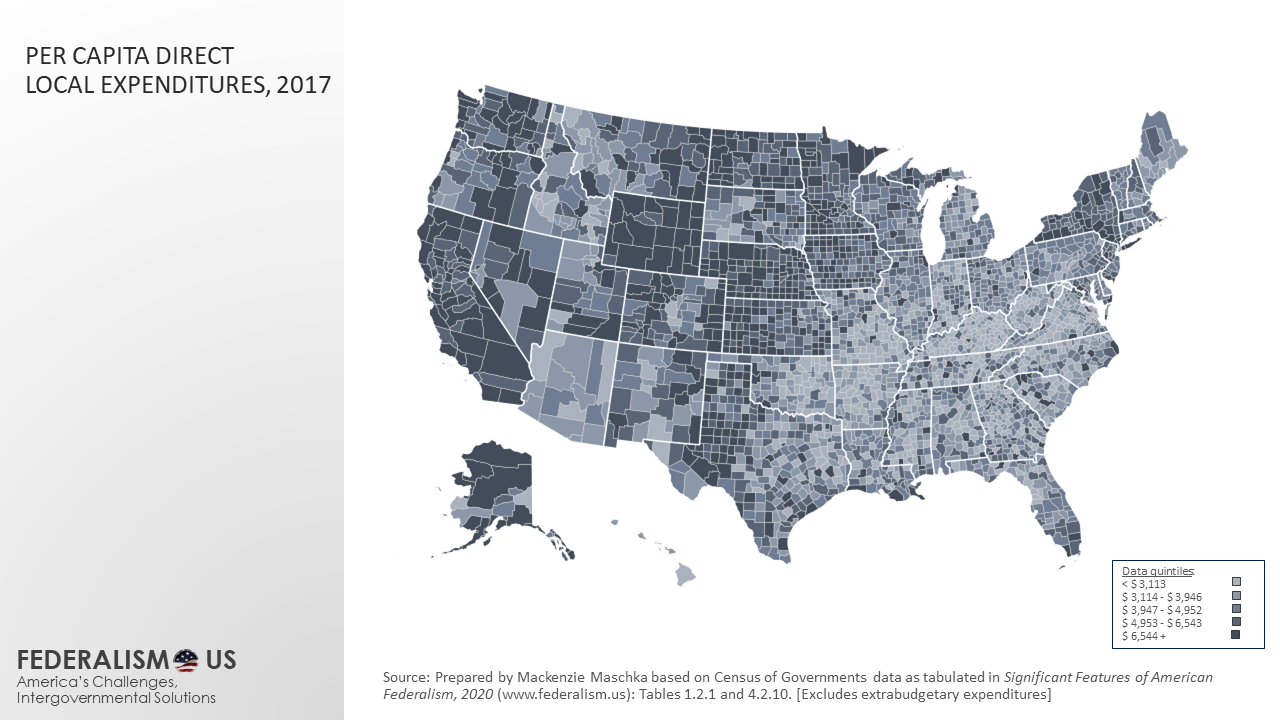 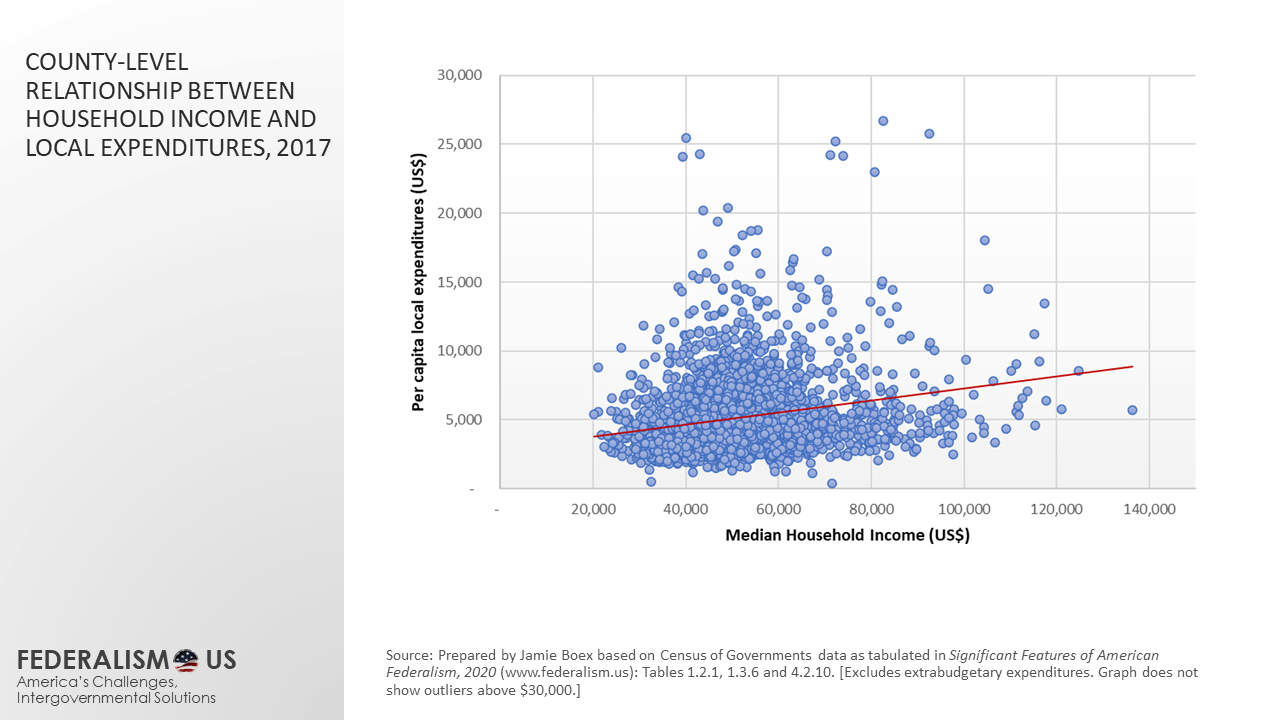 Why is the intergovernmental lens important?

Similarly, local government spending (per person) in New York State is the highest among all states—in part as a result of the fact that counties in the state have significant public welfare responsibilities (whereas this is almost exclusively a state-level function in most other states).

By working across government levels, the federal government is able to focus on what it’s good at (national coordination and distributing resources), while leveraging the strengths of state and local governments (greater responsiveness and accountability) to make sure highways and roads are properly constructed and maintained, so that people and goods can move quickly and efficiently from coast to coast.

Jamie Boex (jamieboex@gmail.com) is a Fellow of the National Academy of Public Administration.